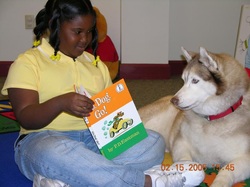 Nausheens Cinnamon Wakhan (1994-2006).  His name meant "Great Spirit" in the Sioux Indian language and he lived his life to the fullest.  He was the founding dog for Star Bright and spent 94 hours volunteering as a therapy dog.  He was the star of pawprint parties and the hit at schools.  He liked children and he liked doing the reading sessions.  The day I had to make the decision to put him down was the hardest of my life.  We stood outside the vet's office waiting when 2 little boys ran over to us and asked if they could pet Khan.  I stood with tears in my eyes as they petted and kissed him on the head. 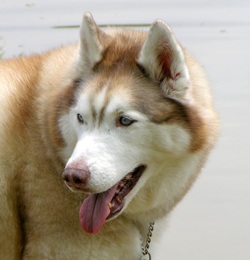 He was so weak from kidney disease but he gently looked up and gave each of them a lick on the cheek.  How truly fitting the last encounter in this world was a chance to be with children.  The boys never knew why he was there and they yelled "Merry Christmas Mr. Sled dog".  I waved good-bye and walked into the vet's office.  Khan walked over the bridge on December 26, 2006.  I will watch for your silver harness in the northern skies, blue eyes. 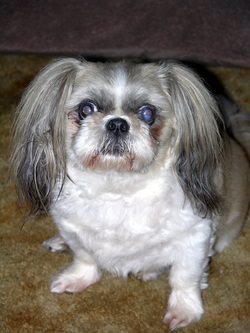 Rainbow's Little Son Shine (1992-2008)  Sonny's philosophy was very simple.  "Pet Me".  He never met a stranger and would even sigh in the car if he saw someone in a neighboring car or walking on the street.  Therapy dog work was right up his alley and very little ever stopped his sunny attitude.  He visited in hospitals, schools and libraries.  He could be very disobedient when he wanted to but he always was sorry. 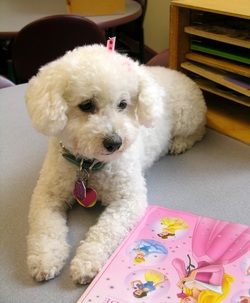 Sophie passed over to the Rainbow Bridge in 2012.  She was a lttle rescue from Coastal Poodle Rescue in Florida.  She was loving and kind despite her background.  Her owners Wayne and MaryEllen Koser were wonderful and spoiled her rotten. 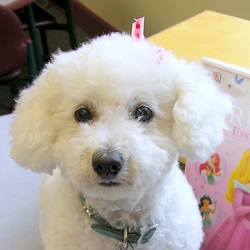 Sophie visited at the library and local schools.  Go rest high on the mountain, Sophie, your work  on earth is done.  Everyone misses your laughing eyes. 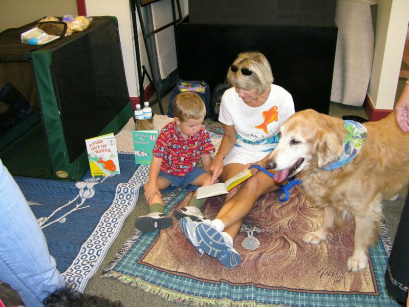 Tony was a great dog.  He was another senior in our group but that didn't hold him down.  He loved his visits and being with the children.  He made regular visits to the libraries and schools as well as participated in the public literacy events. 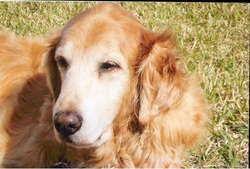 Tony went to the Rainbow Bridge in 2006 and he also is missed by his owner Shelley Hunsberger. 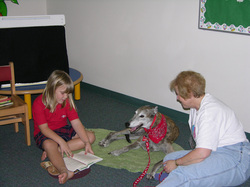 Mocha was a rescue greyhound and most would have considered him an elderly dog when he joined Star Bright.  He would be patient when the children read to him at the local library.  It was an added bonus that his owner was one of the librarians. 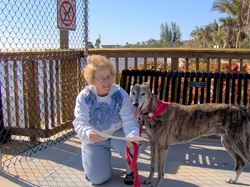 Mocha now races at the Rainbow Bridge and is missed by his owner Marilyn Mittleman. 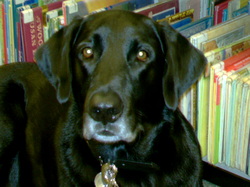 Shadow was a Labrador Retriever and a great southern gentleman.  Shadow lived with Tammy Winchester and they helped with the Waggin Tales reading program.  Shadow spent his early years aboard a boat. 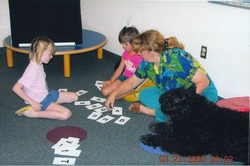 Bijou was a Bouvier De Flandres.  She was one of our founding dogs and served very faithfully in what place she happened to be.  She passed on to the Rainbow Bridge in 2013.  Her owner was Karyl Hall. 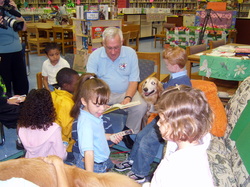 Maggie was a Golden Retriever.  Maggie served mostly at our Morningside Branch of the library.  She always offered a golden smile to anyone who passed her way.  She went to the Rainbow Bridge in 2014 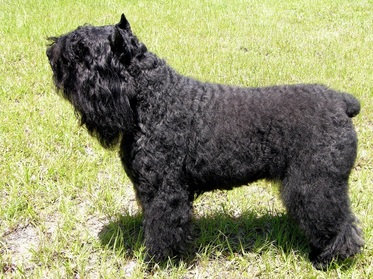 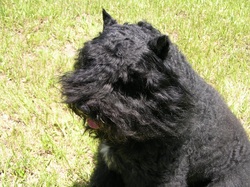 Stryker was a Bouvier De Flandres.  He was the second dog Karyl Hall used when working with our therapy group.  Stryker served mostly as our test dog for therapy tests.  He has gone to the Rainbow Bridge today August 3, 2015.  He will be missed.  So long my friend.
Powered by