Back in December of 2004, when I came into the pound to temperament test a dog, I took a walk through the adoption building.  I wasn’t thinking of getting another dog just occupying my time for a few moments while I waited for the dog I was going to test.  I glanced to my left and saw her, a tri-colored black collie. She sat leaning against the chain link gate gently wagging her tail.

Many things flew through my mind…I didn’t need four dogs, probably wasn’t housebroken, probably had emotional problems and the BIGGEST problem how to convince my husband he needed another dog.  I patted her head and told her someone would adopt her. But I couldn’t.  She sat down and looked
me straight in the eye and smiled; tail wagging.  I continued on my way but could not get that look out of my head.

I began building a case on reasons I could adopt her.  She would make a great therapy dog, kids love collies and she would make a great obedience show dog.  I sat in the lobby listening to the staff tell folks that adoptions were closed until after Christmas, yes the collie was still here but it would be a first come basis on Monday.  I thought in my mind again, someone would adopt her.  Then I heard me say I want that collie what do I do next.

I got into the truck with my husband and we proceeded to drive home.  He asked me how did the test go?  I told him it went great and then I blurted out I want the collie.  She would be a great obedience dog and I could use her for therapy.  Besides he hadn’t bought me a Christmas present and she was only 75.00.  That was a pretty cheap present.    For the second time in my married life my husband completely made me speechless by saying all right.

I spent the entire weekend worrying about getting to the humane society to late to adopt her.  I visited her on Saturday and told her I would try to adopt her the following Monday morning.  I told my husband he would have to go to work an hour early because I wanted to be at the humane society before anyone else.

As luck would have it the weather turned very cold over the weekend and it was down in the low 50’s on Monday morning.  But I wasn’t going to take any chances on losing that dog.  I dropped my husband at his office and rushed to the humane society.  I felt sick worrying about losing the dog.  I kept thinking how I would explain to the police, “sorry officer, but I was speeding because someone might adopt the dog I want”.

As I pulled into the parking lot and no one was there, I did a happy dance beside my car in celebration. The time was 6:15 am.  When the staff arrived they laughed and confirmed I was first in
line.  At 10 am when I finally signed all the paper work and she officially became my dog, I returned to the kennel.  I knelt on the floor and told her she was indeed my Lassie, come home dog.

I began training her in obedience and marveled at the level of intelligence she possessed.  On April 10, 2005 the pound dog made everyone proud by taking second place in an AKC obedience fun match held in Palm Bay, Florida.  As I accepted the ribbon, I looked down and there she sat gently wagging
her tail as she smiled up at me.

My pound dog, that I named Rainbow’s Second Chance.  Chance went to the Rainbow bridge in 2016. 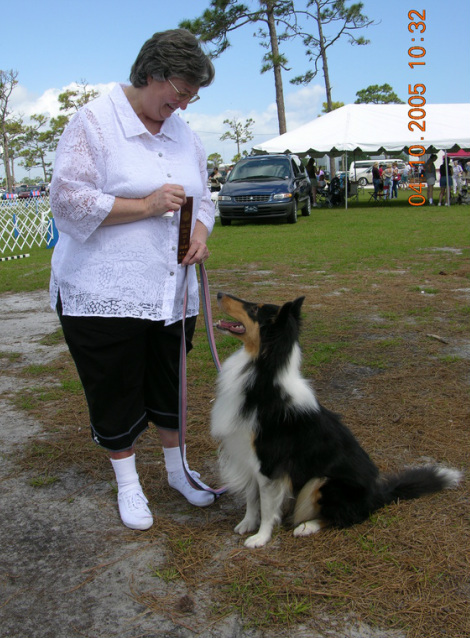